Canadian Member of Parliament speaks out about Russian aggression in Ukraine 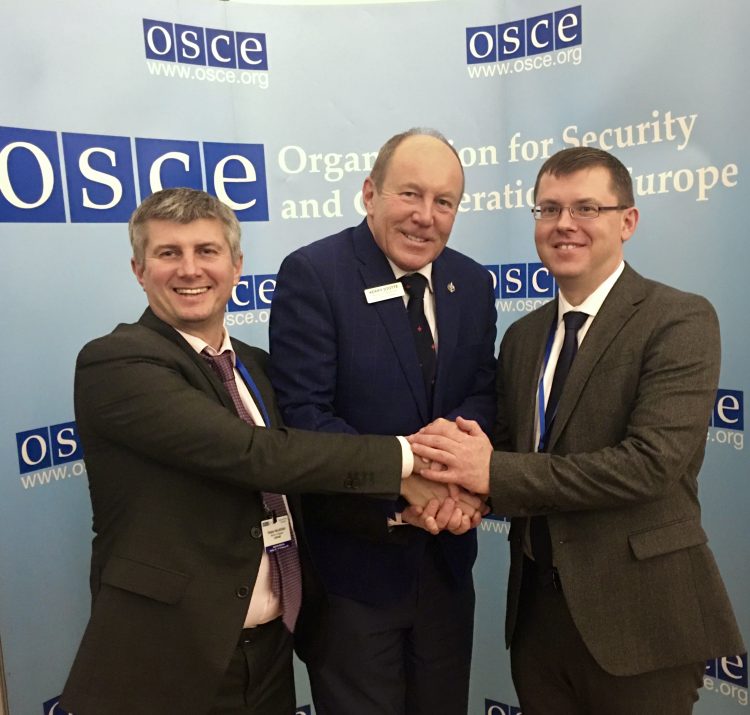 Kerry Diotte met in Vienna, Austria with two Members of Parliament from Ukraine
— Vadym Halaichuk and Pavlo Frolov at Organization for Security and Co-operation in Europe (OSCE) winter meetings.

Edmonton Griesbach Member of Parliament Kerry Diotte condemned ongoing Russian actions in the independent nation of Ukraine and said he’s glad Canada continues to assist that country in its struggle.

“Canada has strong ties with Ukraine and many descendants of Ukrainian immigrants live in the riding I represent in Edmonton, Alberta, Canada,” Diotte told delegates at the winter meeting in Vienna, Austria of the Organization for Security and Co-operation in Europe (OSCE) Parliamentary Assembly.

“As stated in the Programme of the Albanian 2020 document the ‘crisis in and around Ukraine remains the most pressing security challenge in Europe,” Diotte told delegates Feb. 20 who represented 57 nation states including Canada, the United States, the Russian Federation, Ukraine, France, Austria, Germany and the United Kingdom, among others.

Diotte attended the winter meeting as part of a small Parliamentary delegation from Canada.

“We in Canada have also consistently and firmly condemned Russia’s illegal annexation and occupation of Crimea as well as pledged ongoing support to the insurgence in eastern Ukraine,” Diotte said.

“Unfortunately, despite efforts to strengthen democracy in Ukraine and to work toward a resolution, the conflict in Donbas continues and Crimea remains occupied,” he said. “We still have work to do.

“Could the (OSCE) chairperson please elaborate on the plans to de-escalate and resolve the crisis in and around Ukraine and the strategy to make progress in 2020?” Diotte asked.

The Edmonton Member of Parliament was told at the meeting that the crisis in Ukraine will be raised by George Tsereteli, president of the OSCE Parliamentary Assembly on a visit to Moscow.

Diotte is a member of the Canadian Parliament’s Standing Committee on Foreign Affairs and International Development.