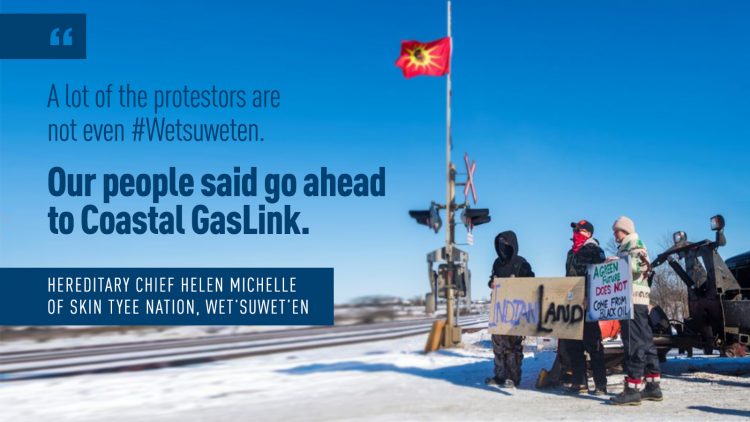 Notorious English punk band, The Sex Pistols had a venomous anti-establishment hit in 1976 titled “Anarchy in the U.K.”

Flash forward a few decades. We’ve got the real thing — right here and right now. Welcome to Anarchy in Canada.

Our country’s national passenger railway system has ground to a halt due to a handful of radicals who are staging illegal blockades to protest the planned Coastal GasLink pipeline in British Columbia, part of a $40-billion LNG project that would see clean Canadian natural gas shipped to China to help that country stop burning coal.

That’s a project that’s been approved by regulators after extensive consultation and has the enthusiastic support of the vast majority of indigenous people eager to reap its rich financial benefits. It also has the support of B.C.’s NDP government, an entity not usually enamoured of the energy industry.

But here’s the rub. A handful (but not all) of the British Columbia Wet’suwet’en hereditary chiefs oppose it. So, now a cascading series of protests are plaguing this country, the biggest by Mohawks near Belleville, Ont. that has shut down passenger train service and severely disrupted freight traffic.

Lost in the emotion amid these blockades is the fact that the majority of Wet’suwet’en hereditary chiefs actually support the pipeline. Observers have noted only five of 13 hereditary chiefs oppose the Gaslink pipeline. And the validity of two of these opposing chiefs’ titles are in dispute given accusations two females chiefs had their chiefs’ titles stripped and given to men due to the women’s support for the pipeline.

Roads nation-wide have been illegally blocked, as has the B.C. Legislature on the day of the provincial speech from the Throne. Ports have been shut down too.

There are court orders in place calling for an end to blockades, yet there’s little or no action to stop this ongoing insanity that’s disrupting people’s lives, keeping them away from work and costing the nation’s economy hundreds of millions of dollars.

And where has our prime minister been in all of this — our virtue-signaller-in-chief?

Well, Justin Trudeau has been largely tied up gallivanting around Africa kissing up to politicians in hopes of winning what he finds more important — a seat for Canada on the United Nations Security Council. The expression, “fiddling while Rome burns” comes to mind.

Trudeau has done nothing to end this. He says there’s a need only to “dialogue” with protesters even as there are dire warnings disrupted train service will lead to shortages of propane, chlorine to treat our tap water, de-icing fluid for airliners and even food.

“We are not a country where politicians can order the police to do something, we are a country that has confidence in its police forces and allows them to do their work in scope of these blockade,” the virtue-signalling Trudeau said with a straight face, knowing full well he indeed has the authority to order an end to this mayhem.

Conservative Leader Andrew Scheer, meanwhile, expressed views that I guarantee resonate with 95% of average, common-sense Canadians. “I believe it’s time for the law to be enforced,” said Scheer. “We have court orders,” he said. “We have court injunctions. They need to be respected. “We cannot allow a small number of activists to hold our economy hostage and threaten thousands of jobs.”

Alberta Premier Jason Kenney agreed, noting Indigenous people along the route of the proposed B.C. pipeline want the jobs and prosperity that comes with them. “All of their livelihoods are being disrupted by an angry fringe,” he said. “I think Canadians are losing patience with this. I know Indigenous people are.”

Hard-core activists are leaping on the protest bandwagon to spout Marxist, anti-capitalist venom. One such radical bunch has a home at, itsgoingdown.org. That website boldly promotes the Twitter hashtag #ShutDownCanada and breathlessly details illegal acts of sabotage against railroads.

The website boasts: “We chose rail because it has a long history aiding in the colonization and confederation of Turtle Island and the displacement and death of Indigenous people … F- – k the state. F- – k the colonial courts. It’s time to stand up and shut sh-t down.” These are the kind of people who are being emboldened by Trudeau’s wimpy, irresponsible lack of leadership.

What’s especially galling is many in the mass media are giving an almost unquestioning platform to so-called experts who are anti-capitalist, anti-oil and gas activists. As a former journalist of 30 years I can’t stomach the lack of balance.

Panelists on TV and radio have been afforded a generous platform to spew a steady barrage of accusations about Canadian society peppered with emotive phrases like “colonialism,” “European invaders” and more.

One woman interviewed by the CBC said the following controversial blanket statement and wasn’t even challenged by the interviewer for it: “The oil industry is a contributing factor to the missing and murdered aboriginal women.”

Trudeau and his Liberals insist dialogue, not enforcing the law, is the key. But here’s the burning question: Why? Why is there a necessity to dialogue with activists in Belleville, Ont. about the situation thousands of kilometres away in B.C. whereby there’s already a legal court order to allow the project and stop the blockade there?

Trudeau dispatched his Indigenous services minister to “dialogue” with Ontario Mowhawks — who are blockading train service —  presumably about the fact they don’t agree with the court decision in the Wet’suwet’en case. The “dialogue” seemed more like the minister begging for protesters to please stop disrupting train service.

Canadians can be forgiven if they’re tired of hearing Trudeau talking about dialogue when this nation is in crisis. They want and deserve action. Their blood is beginning to boil — and Trudeau has done nothing but give them all a cold shoulder and his trademark smarmy, morally righteous sneer.

If you’d like to send a strong personal message to Trudeau, I’ve put together a very popular on-line petition you can sign. Please do so and share it on social media and with friends. Please go here: https://www.kerrydiotte.com/blog/

Don’t ever think that speaking up doesn’t help. If every Canadian who’s enraged by this situation speaks out, even this incompetent, globe-trotting prime minister will be forced to take action.

– Anarchy in the U.K., The Sex Pistols

(Comments? I’m interested in your views. Please leave me a message at kerrydiotte.com)