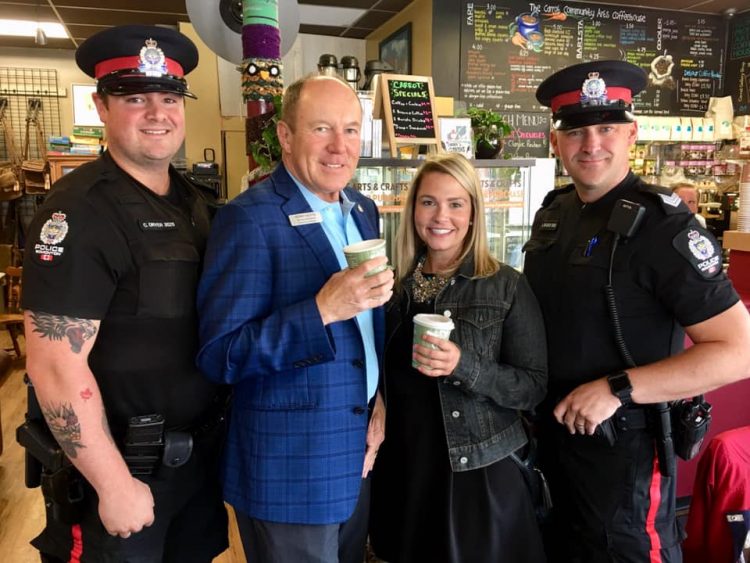 On Monday (June 15) I spoke at the Edmonton city council public hearing on policing. I argued that no changes – especially budget cuts – should be contemplated in these highly charged emotional times. Here’s the text of my presentation:

A horrifying event took place on May 25. That was the day that Minneapolis police officer Derek Chauvin arrested 46-year-old African-American George Floyd. A video surfaced that showed the officer kneeling on Mr. Floyd’s neck for almost NINE minutes.

As we know, Mr. Floyd died. Officer Chauvin and three others involved in the arrest and death were fired. All of them now are facing charges. Any sane person who watched the video was horrified and disgusted by it, including I’m sure, every police officer in our city.

As we know, Mr. Floyd’s death sparked protests in 75 U.S. cities and around the world — including here. Sadly it also sparked civil unrest, riots, looting and the deaths of innocent people. Police officers in the United States were among the victims and that too is horrific.

Let me state the obvious. But it needs to be stated. Not one member of the Edmonton Police Service was involved in the senseless death of Mr. Floyd. I’m absolutely sure that, not one EPS officer, is anything but disgusted by it.

Yet that terrible event has stoked an unspeakable anger toward law enforcement in the United States, here and around the world. It’s taken over the headlines amid the most serious worldwide health pandemic in 100 years.

There are cries to defund the police. Dismantle the police. Scores of police officers who had nothing to do with the death of Mr. Floyd have been attacked and assaulted amid a mob mentality. Right-minded people find that despicable. I certainly do.

In the midst of this world-wide anger city council has called this public hearing to take a hard look at policing here in Edmonton. There’s a suggestion to give the police $16.3 million less in 2021 than previously approved. There’s also a suggestion THAT money should be allotted to social programs.

I’m a former city councillor and member of Parliament for Edmonton Griesbach. I’ve got a keen interest in this subject. My riding is one of the poorest in Alberta if not THE poorest according to household incomes. I represent many impoverished and marginalized communities.

Like every city councillor here today, I want the very best for my constituents including the best policing and best social services. And we’re lucky in my riding to have both. We’ve got beat cops who genuinely care about their communities and about building relationships.

We’ve got scores of not-for-profits either located right in our riding or providing amazing service to people in it.

The bottom line is my constituents are fortunate to have great service from both the EPS and the many social agencies. I also know the EPS often works in tandem with many of those agencies.

I believe one of the main duties of a politician is to listen to the people they represent. I make a point to do that by sending out regular surveys to each and every home in my riding. As well I reach out regularly on social media.

I’d be willing to bet many city councillors might have the same experience if you disregard the complaint letters that are form letters as part of an orchestrated campaign.

These are highly emotionally charged times. People are rightfully angry over the horrible death of Mr. Floyd. Many people are angry at all police and people in authority. So I believe this is not the time to be embarking on drastic changes to the way we do policing in the city of Edmonton.

It’s almost 30 years now to the day that an EPS officer was shot and killed when he responded to a bank robbery just north of the city’s downtown. I remember it well because I covered it as a journalist. His name was Ezio Faraone. He was just 33 years old when he was killed June 25,1990. Both of the men involved in his murder were sent to prison. Today there’s a park named for Ezio and a statue in his memory.

Imagine if HIS murder had happened just a few weeks ago. Would we be having a discussion about cutting police budgets? I think not. And nor would it be the appropriate time to be discussing the matter.

I’d suggest it’s only appropriate, we all take a deep breath.

Let’s first get over the anger we feel about Mr. Floyd’s death.

Let’s talk about this very serious issue of policing when everyone has had time to heal over that death.

We need to pause. We owe that the our citizens — and we owe that to our police officers.